Overview of ACERA/CEBRA Projects: a summary of project outputs and outcomes

Stakeholders expect decision makers to transparently communicate criteria and decisions. However, environmental risk assessment includes uncertainties in information and also in process. Frameworks and tools can support formal decision-making in that context. They can be in the form of graphic depictions of relationships between variables, so-called networks. In those networks, causal relationships can be based on subjective estimates or on prior data but uncertainty applies in both cases. CEBRA developed an approach that allows managers to use these networks and determine how much input estimates (e.g. resources) would have to change before the output (decision) would change.56,57 In a related project, CEBRA combined the advantages of decision networks (a model of the world) with that of geographic information systems (GIS, they provide spatial explicit data about the world) into an ArcGIS software tool. The tool supports developing spatial models as decision networks and the handling of data parameters and their uncertainties. It was tested in a practical application, for the management of invasive environmental weeds.59 CEBRA also developed a method for reducing the complexity of models of alien biota without compromising on interpretation capability.60

The Risk-Return Resource Allocation model used in the Department estimates risk and cost given specified biosecurity investment scenarios. CEBRA developed an approach for directly comparing the uncertainty around model predictions under different investment scenarios, allowing decision makers to gauge how much confidence they can place in the results. Project findings were subsequently incorporated into the Risk-Return Resource Allocation model.65 In the context of biodiversity values CEBRA examined uncertainty in vegetation condition measures, which provide an index of site quality and are used to guide cost-effective investment towards improving biodiversity values. A simulation analysis revealed the most cost-effective actions for an example woodland ecosystem.66,67

Cost-benefit analysis (CBA) and Multi-Criteria Analysis (MCA) are decision-making frameworks that are applied to maximise net benefit or utility in decision-making. However, the two frameworks differ in many aspects (e.g. rationality, goal, data requirements). CEBRA created a list of factors influencing selection of CBA or MCA as the major decision support tool for biosecurity management. As scientific opinion about the two frameworks on their universal applicability has shifted towards a complementary perspective, CEBRA also provided guidance in the form of decision trees on complementary use of both.68 Applied in practice, benefit-cost analysis (BCA), for example, is an important part of the decision making process immediately after an incursion was detected. Under the National Environmental Biosecurity Response Agreement (NEBRA), a BCA should consider whether the costs of a national biosecurity incident response would be outweighed by the benefits. Knowing how time critical initial response is for the success of eradication or containment of an oubreak, CEBRA developed a guide for preparing a BCA for a marine pest incursion in short time. The set of notated guidelines provides step-by-step advice that is suitable for non-economists alike.69

Biosecurity threats are made up of a large number of pests and their associated biosecurity measures. When decision makers allocate funding to address those biosecurity threats, they usually rank alternative projects by their benefit-cost ratios and pick one that generates the highest ratio. A problem with this approach is, however, that the average benefit-cost ratio of a biosecurity project can be highly sensitive to scale. A portfolio approach is desirable as it aims to maximise rates of return from a given biosecurity measure, considering the optimal scale of the control program under different budget levels. CEBRA illustrated these points in a study on papaya fruit fly, through the Torres Strait pathway. This study investigated allocations between border and post-border surveillance and identified an investment ratio for border and post-border measures that maximised rates of return. It also determined an optimal grid size for papaya fruit fly, one where all losses and expenditures were minimised.70

Invasive species cause great economic and environmental damage to the Australian landscape. A framework developed by CEBRA provides a coherent structure in which to address crucial and urgent management issues relating to the detection, control, containment and eradication of invasive species — taking into account budget constraints and uncertainties around species occurrence and habitat. The framework can be used by state agencies to set priorities for emergency response, especially for plants.71,72,73,74

Decision-makers need to make appropriate pest management decisions over time. CEBRA developed a support tool, implemented as an Excel spreadsheet, for making decisions on eradication and control activities after pest incursion. The generic model was applied to two case studies. To estimate the impact of invasive species on the economy, CEBRA developed baseline consequence measures for the expected damages from an incursion of three invasive species of concern into northern Australia via the Torres Strait islands pathway. The consequence measures for papaya fruit fly, citrus canker and rabies enabled estimation of the annual or cumulative costs over a period of incursion for states or growing regions. These baseline measures can help inform cost-benefit analysis, portfolio allocation models and other modelling techniques. Another consequence of this project is the development of an optimal trapping grid for papaya fruit fly in Queensland.75 CEBRA also created a spatially explicit decision support tool for managing invasive species across a landscape and for prioritising of management efforts.76

Foot-and-mouth disease (FMD) is the most serious threat to the livestock industry. To support decision-making around FMD, CEBRA developed (i) a software platform for invasive species spread, (ii) a local and optimal active surveillance measure for FMD (using bulk milk testing) after a potential incursion and (iii) a key vaccination protocol and optimal buffer zone /correct countermeasures against FMD should an incursion occur.77 As part of two separate projects, CEBRA expanded the functionality of the existing Australian Animal Disease model (AADIS). One project incorporated a prototype vector module into the model to allow the simulation of spread of vector-borne diseases of livestock.78 The second project expanded the model to support FMD preparedness and post-outbreak surveillance and management. Hypothetical outbreak simulations in different jurisdictions tested the effects of different approaches for disease control and post-outbreak management on duration and size of an outbreak, sampling effort, cost of surveillance and loss of trade costs. The project demonstrated how modelling functionality can effectively support policy development around important issues after an FMD outbreak.79

During my professional career with the Animal Division of the Australian Department of Agriculture and Water Resources I was involved with a number of projects with the Centre of Excellence for Biosecurity Risk Analysis (CEBRA). CEBRA has an excellent track record when it comes to applying science to address difficult and complex quarantine and biosecurity issues. It has been my privilege to have worked with experienced and skilled CEBRA staff, with particular reference to Professor Tom Kompas. Tom and I collaborated on several high priority projects to support disease surveillance, early detection and emergency disease response. These involved innovative epidemiological and economic approaches and the work has been well-received both nationally and internationally. I wish CEBRA well for the future. 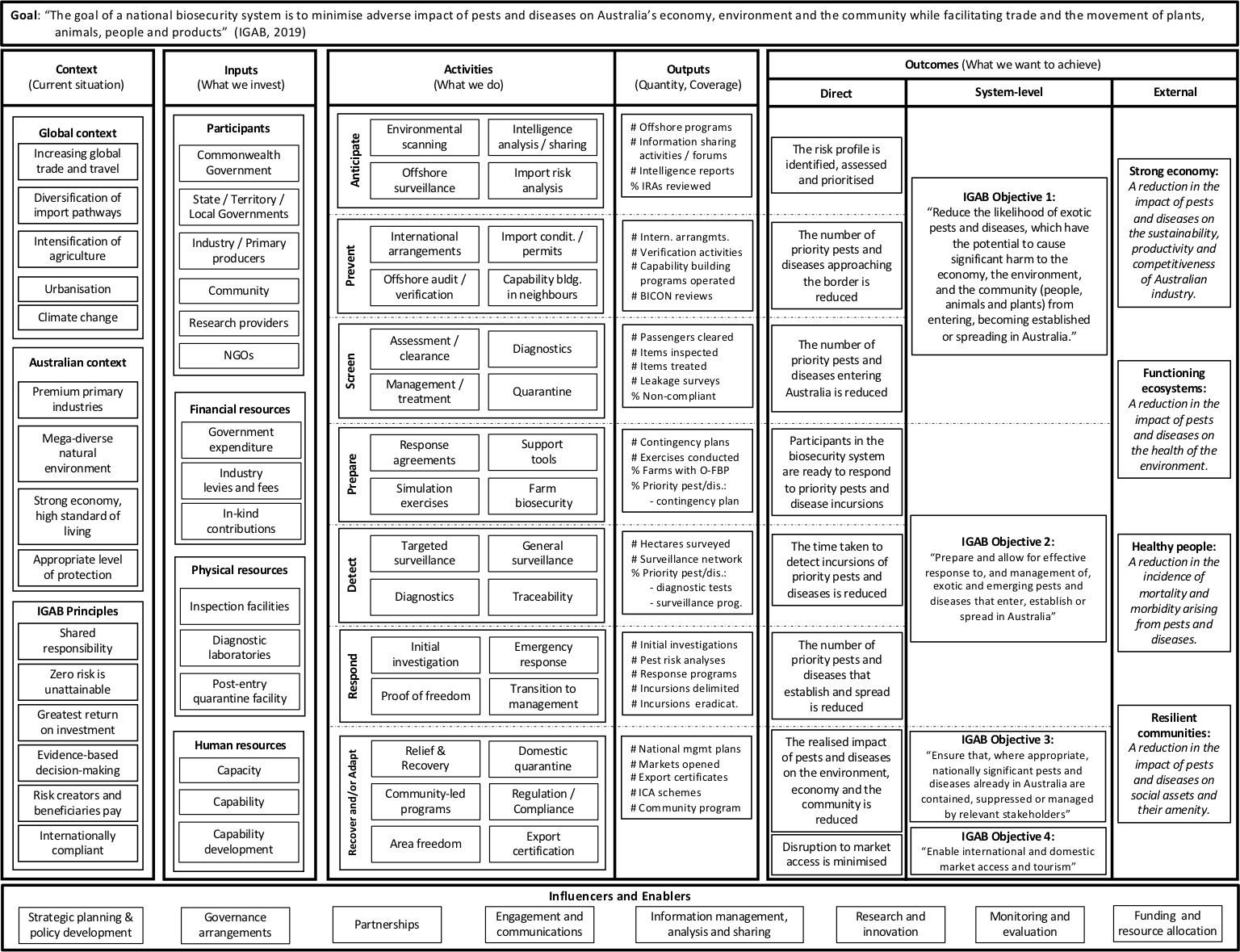 To address limitations of decision support tools CEBRA developed a five-step prototype framework, providing the structure for combining subjective predictions of cause-and-effect elicited from experts with the value judgements of decision-makers. The focus of this framework is on estimating expected consequence. CEBRA illustrated application of the framework within three broad biosecurity decision contexts. In another aspect of this project, CEBRA identified the most appropriate tools and methods for characterising impacts of invasive pests on primary production, amenity and the environment, which were evaluated in a biosecurity setting.81,82,83

CEBRA reviewed the Pest Categorisation Questionnaire, a decision-support protocol that informs cost-sharing arrangements in the event of a pest incursion. The review identified weaknesses in the protocol and suggested solutions. It informed a later review of the Emergency Plant Pest Response Deed, the overall cost-sharing agreement the decision-support protocol is part of.84,85

76. Chades, I. (2010). Strategies for managing invasive species in space: Deciding whether to eradicate, contain or control. Australian Centre of Excellence for Risk Analysis, report 0902.

83. Walshe, T. et al. (2012). A review of current methods and tools used by biosecurity agencies to estimate consequence impacts on primary production, amenity, and the environment. Australian Centre of Excellence for Risk Analysis, report 1002A ID1.